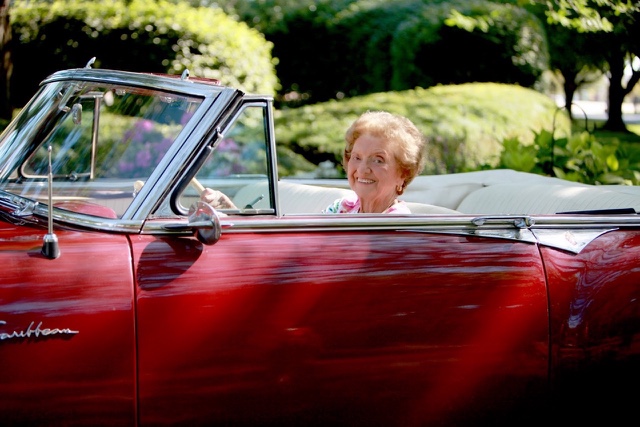 I woke up this morning to news that my Grandma Ginny had passed away.  Family had been by her side for the last several days and I was getting updates from afar. The most touching was a video of Ed and Janet Kaiser playing "It Had to Be You" on the piano in the living room. This was Grandma and Grandpa's song.  When Grandma and Grandpa arrived for Sunday Brunch at WeaverRidge, Ed would stop whatever he was playing and transition to "It Had to Be You", just for them.  Yesterday, a dozen roses arrived for my paternal grandma (Ginny) from my maternal grandpa (Dale). He remembered it was the first anniversary Ginny would wake up to without Bob. But she managed to make it to be with Bob before the day was through. They were able to celebrate their 70th anniversary together after all. And with faith as my guide, I imagine it was the best anniversary celebration ever!

I was not able to be with my family during her last days as I am spending my last two weeks of "the journey" with my best friend from high school, Kristen, and her family in Spain.  As my mom just shared with me, she can't think of a better friend for me to be with during this time.  She couldn't be more right.  But more on that story in the weeks to come.

This morning I went down to the sea to remember Ginny and be alone with my thoughts and memories of her.  Everyone grieves differently, but as part of my way to honor Grandma Ginny, I'd like to share some of my memories here.

Grandma Ginny's friends were her family.  She was a loyal wife to my Grandpa Bob (who passed away July 4, 2014), a caring mother to 5 children and their spouses, a remarkable grandmother to 14 grandkids and doting great-grandmother to 20 great-grandkids.  I say "remarkable" because It would appear to me that she had a unique personal relationship with each one of her grandkids.  I believe we could all say that we had her to ourselves for some period of time and that noone was over looked.  With 14 grandkids, that is remarkable. One of the most memorable times with Grandma was when birthdays came around. She would pick me up after school and take me to get a Coke and french fries from Hardee's, conveniently located near ToysRUs. And then it was a visit to Britches and Bloomers.  In middle school years these stops transitioned to Gloria Jeans for an "iced cap" and then Limited Too.  Every month we would celebrate birthdays at the farm with a cake from   Trefzgers.  And in all my 34 years, her birthday cards were never late to arrive by mail.  I just learned her secret to that a few years ago.  She would buy cards all at once, then put the birthdates where the stamp would go on the envelope and send them off when the time came. Which brings me to the next memory...

Grandma Ginny was efficient. The epitome of this was her phone messages. Everyone in her family can attest to this one. We all had messages on our voicemail from her with no "hello" or "goodbye" but just the information she wanted you to know.  Example: "Dinner at the pool at 7."  That's it.  No "This is Grandma." or "Hope to see you there."  This week I heard another example was shared. My youngest cousin, Travis, has a not-so-secret obsession with Taylor Swift. Ginny was aware of this. So this week Travis played the voicemail from Grandma that he had saved for several months. "Taylor Swift is on channel 19 at 7."  No "Was thinking of you." or "Hope you don't miss it!"  Just the facts.  But maybe that's how to explain how she got things done. She kept up the farm, paid the bills, kept tabs on the ever growing family and somehow never seemed overwhelmed.  At least that's how it seemed to me. Despite all that she had on her plate, I never felt I was an inconvenience or that she didn't have time for me. She just let me tag along. If she had work to do at the office, she would let me play under her desk with the Tupperware full of Legos or the giant coloring book and the tin of crayons.   In the summer, keeping up her gazebo and flowers were her passion, so joining her on a run to Hoerr's was always a treat.  She would look for a rose bush to add to her rose garden... I picked my favorite based on the best name, but she always picked the most beautiful.

Grandma Ginny was honest. Some may say she was honest to a fault. She was in the same camp as Grandpa when it came to their concern for me finding a husband. During dinner on one of my trips home, she told me I better hurry up and find a man before my dad has to walk me down the aisle in a wheel chair. Months later, Luke, who was not present at the time but of course heard about the exchange, asked her if she really had said that. She denied it but Grandpa, whose words were few in those days, piped up and said "Yes ya did, Ginny. Yes ya did." She may or may not have responded with the classic Ginny-ism: "That's ridiculous." Grandma could be our biggest critics, something that we all learned to take in stride, but she was always the first to defend us, something that reminded us that she would love us to the end.

Grandma was a woman of faith and it was her faith that carried her home. I know it was a poignant moment for my dad to be able to pray with her in her final hours and share the 23rd Psalm with her as she mouthed the words after him. 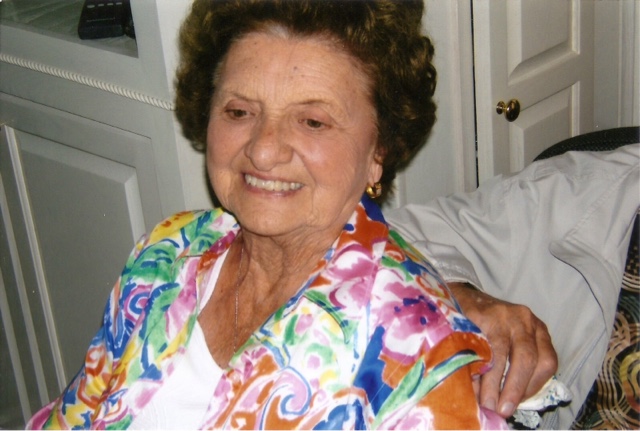 I have so many memories tied to times with Grandma. And these are the blessings of the gift of growing up next to your grandparents living 5 minutes away, something that all 14 of us have been blessed with. 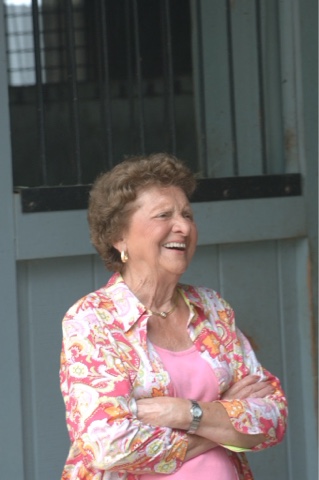 I remember her playing the piano, her hymn book always on top of any other music. I heard her sing as she played on a few occasions. Admittedly, the playing memories were much sweeter than the singing memories. (Must be in the genes as the Tonedeaf Weaver's only hit, "Happy Birthday" will never win a Grammy. Maybe there is an anti-Grammy?) But the one sweet singing memory I have was when she would sing Silent Night in German. That was fascinating to me. And then, on that same piano, my cousins taught me my first song, "Hot Cross Buns". Later, Grandma would give each family a K. Kawaii baby grand piano as she wanted each of us to have the opportunity to learn to play, if we wanted. This could be one of the greatest gift she gave to me.

There was always a bag of M&M's in the bread drawer. And sometimes she would send us home with our own baggie. Which reminds me of the only thing that I recall that really pushed her buttons: Don't spin plastic bags before putting the twist tie on. 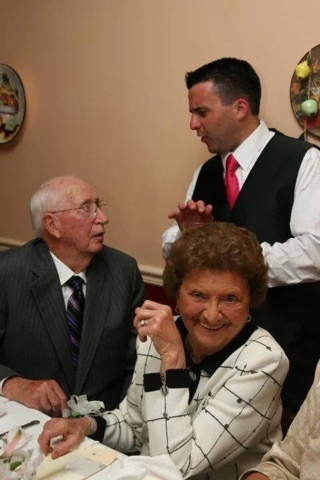 There were always Dove bars in the freezer. And breakfast cereal always came with a healthy tablespoon of sugar, even Frosted Flakes.

Every grandkid who spent the night knew where she hid her jewelry every night.

I can hear her yell for grandpa across the farm from the sliding glass door "Raaaaaaaa-bert!" ... her voice cracking on the "bert". Or yelling for one of us at the pool, but hearing 4 of our cousin's names before she got to the name she wanted.

Halls cough drops, wadded up Kleenexes, paper Dixie cups by the Hinkley and Schmidt tank. Batt-ries in the hall drawer. I can hear the swinging doors to the bathroom hallway and Sarah just reminded me of the sound of the sliding glass door. 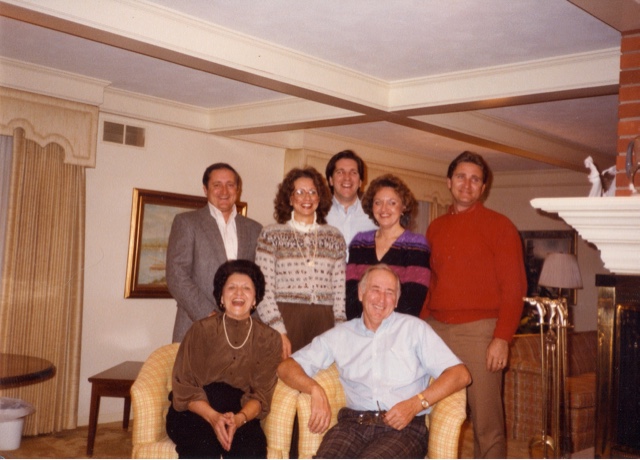 Organizing the annual fall hay rack ride out to the "timber". Faces she made to make her baby great-grands smile. Watering flowers. Lots of flowers. Her khakis and Keds in the summer.

As I walked back down the beach this morning, the only thing I could think of was "thankfulness". Thankfulness to have so many things and sounds and smells I associate with Grandma Ginny. And those memories come just from being with her, by her side or in her view. Those times together changed as I moved away, but one of my favorite memories will always be of New Year's Eve in recent years. I made dinner for Grandma and Grandpa, played a few songs on the piano and then watched Fox News "Rocking New Years" with them. I think it was New Year's Eve 2012 when Grandma first saw the "Ball Drop." She wanted to wait up, granted it was 11pm as we were able to watch east coast programming on central time. The countdown began and the ball dropped and she says "That's it? All those people waited around there for that? That's ridiculous." Classic. 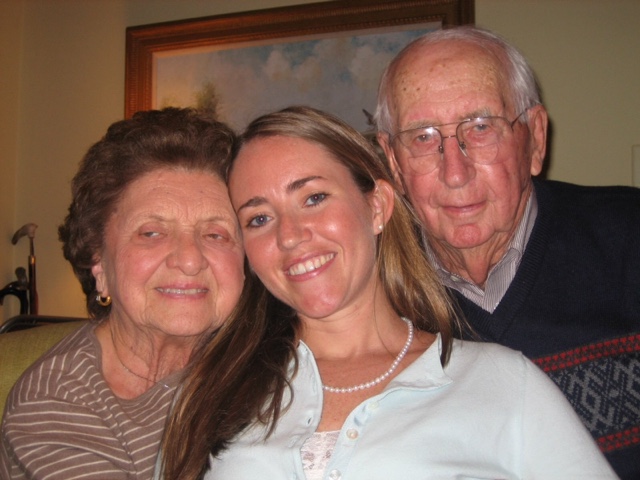 In this time of traveling my one concern was that I would not be there when an aging grandparent died. I'm thankful I made it home to say goodbye to Grandpa Bob last summer. And I'm thankful I got to talk to Ginny just a few weeks ago. Some may not understand this but I'm going to be honest and say I'm glad I was not there when she died. I'm thankful that I have been spared from that for 3 of my grandparents now. I know that I have missed out on special times with my family and I am thankful for the bedside vigil that so many of them have been committed to these last days, especially my Aunt Phyl and Aunt Karen. But I believe I can say these things with peace because I know that those "good byes" that I didn't get to say in person will be long forgotten when I get to greet each of my grandparents on the "other side of Glory". How grateful I am to know that Grandma Ginny has not just been reunited with Grandpa Bob on the day of their 70th wedding anniversary but that she is in the presence of the Lord. And I look forward to the day that I will join them. 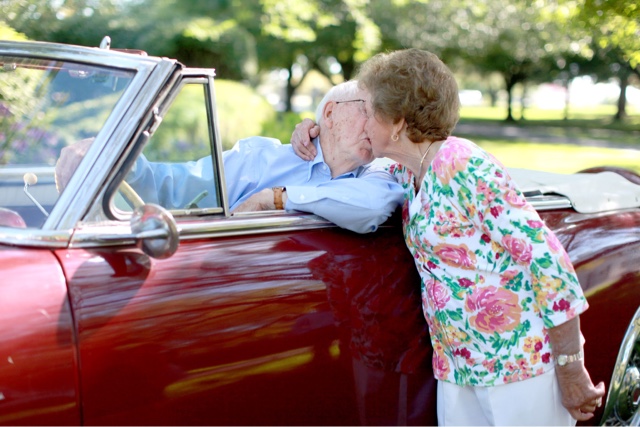