All summer long, the question for teachers and students is: "When do you go back to school?" There is always the day teachers go back which indicates the official end of summer. This day is a sad day. It's fun to see your friends on staff, hear about summer happenings and get excited about what you will do differently in the classroom.  But I don't miss the meetings.  I could rant and rave. All I'll say is that at last year's district-wide meetings, I vowed I would never attend one again, even if it means getting docked pay. The sky-high blood pressure and pounding headache just weren't worth it.  I'll leave it at that.
But here is what I do miss about the First Day of School... the REAL First Day of School...when the kids have arrived. This is an AWESOME day.  This is the day teachers have been waiting for.
I miss the freshman. The tiny freshman. It's funny that this is first on the list of things I'll miss because every other day of the year I generally avoid freshman at all costs. But on this day, they are so wide-eyed and weighed down by their ginormous binders as they cling with white-knuckles to their schedule as though its the blankie they gave up a few nights before.  They ask if I know where Room 135 is.  And I don't know where Room 135 is, but if they tell me what teacher they are looking for I can assure them I will give them GoogleMap accurate directions to the classroom.  I send them on their way, having heard nothing I've said, and watch as they ask the next teacher down the hall if they know where Room 135 is. Oh, the tiny freshman. 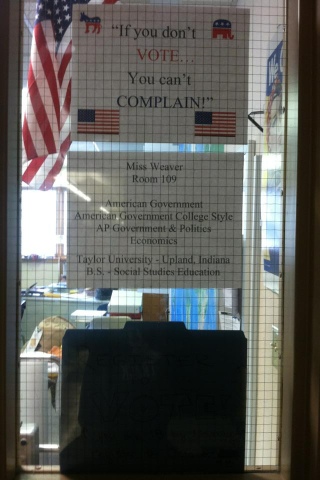 I miss the seniors.  I miss how they enter the school with confidence but still wanting to earn the respect of the underclassmen.  It's amazing to think that 3 years before they were the tiny freshman. It's crazy what 3 years does.  But not as crazy as what changes in the 3 months since I saw them last. They are taller, with longer hair, tanner skin and many times, new friends. It's amazing what the summer does.  This year, especially, I'll miss the seniors as I've gotten to know an incredible group of senior girls through Young Life. One of the only regrets of not returning for the 2013-14 school year is that I won't be able to do life with Katie, Kenna, Kenzie, Claire, Elle, Emily, Morgan and Megan. 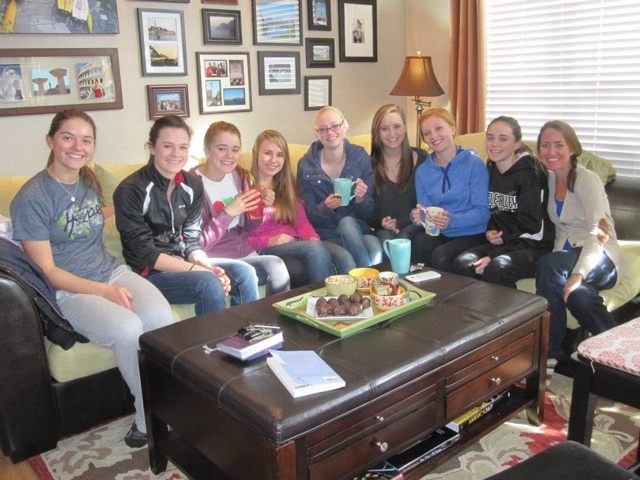 I miss the shiny floors and lockers. Martin and Company always work so hard to get the halls of EVHS gleaming for the first day of school.  I love the cleanness of it all but it always makes me sad to think that as soon as the kids arrive, it will be back to normal. 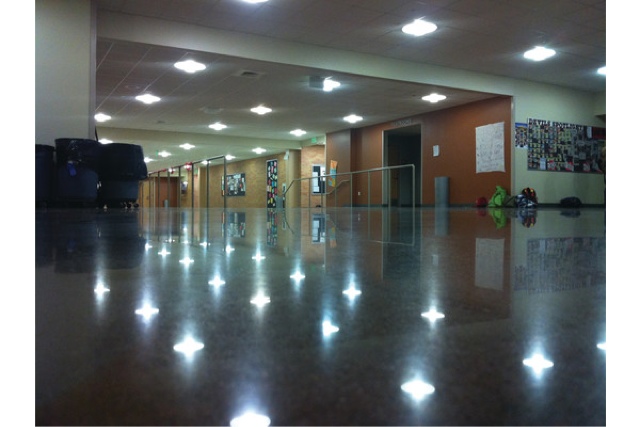 I've been to Wrigley Field twice in my life.  Here are the accounts of those two experiences.
At the end of June, my best friends from college, Annelise and Missy, and myself planned a weekend rendezvous in Chicago, where Missy lives and where Annie used to live.  Missy had already made plans for the Saturday night of the weekend that we chose.  But not just any plans.  She and her husband, Todd had been given tickets to a concert from his brother for Christmas.  But not just any concert.  It was Jason Aldean...who just happens to be Todd's favorite musician...confirmed by the fact that he sang every word of the song "Dirt Road Anthem" (including the country/rap part) at their wedding reception.  But the concert wasn't at just any venue.  it was at Wrigley Field.
This being the case, Annie and I were left to our own devices to find entertainment for Saturday evening.  We had dinner with Missy, Todd, his brother and friend.  Then we joined them for the walk to Wrigley Field. 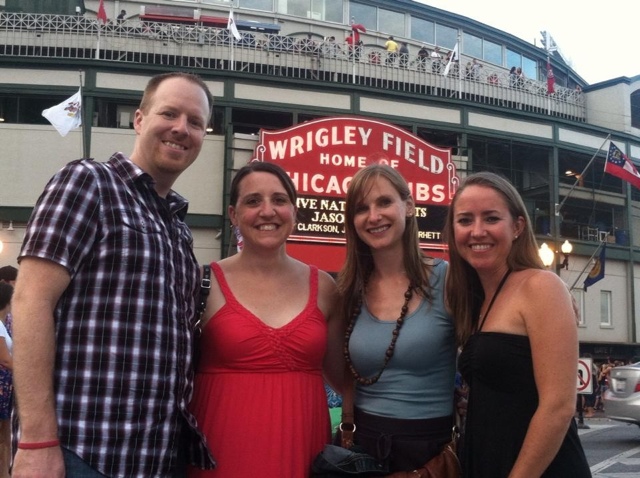 We snapped a pic in front of the stadium, they went to the show and Annie and I looked at each other with a "what now?" look.  I suggested the Cubby Bear, a place an out-of-towner like myself thought was "iconic" while her look gave the impression that there were better places to hang out in Wrigleyville.  But she humored me and we went inside.
We went to the bathroom and encountered a swarm of college-aged girls wearing their "country best" talking about stuff that college-aged girls wearing their "country best" talk about while they are in the bathroom.  Then we got a drink.  We sat at tables that were being methodically removed to make room for a dance floor.  Just before our table was taken away, two guys approached our table.  One was dark and tall...kind of resembling a cubby bear himself.  The other was short and slim and much quieter than his friend.  They ask if we were going to the concert tonight.  We responded "no", in a kind of a regretful tone.  They asked if we would like to go to the concert tonight.  Annie and I shot each other a puzzling glance and before we could respond they told us they had 2 free tickets.  I asked "No strings attached?"  They said "No strings attached."  In unison, Annie and I said we would take them!  As the "cubby bear", whose name was Chris, was producing the tickets he began to explain how they happened upon having 2 extras.
The story turned about to be a rather sad one.  Chris and his wife, who were living in Philadelphia, had this weekend in Chicago planned for over a year including tickets to the Jason Aldean show.  Another couple was supposed to be joining them.  But now, Chris and his wife were going through a divorce and everyone had backed out of the trip, for obvious reasons.  So Chris was stuck with 4 concert tickets and a non-refundable condo for a weekend in Chicago.  Not wanting to throw it all away, he called up his friend, Aaron (short, slim, quieter...), whom he had grown up with in Buffalo, NY.  With 2 days notice, Aaron books a flight to join Chris for a weekend in Chicago.  And now they were sitting at the bar in the Cubby Bear assessing their options of whom to offer the two extra tickets to and Annie and I were the best they could find.  How friendly!
So, we're going to the concert!  I may have been slightly more excited about this than Annie as she's not much of a country music fan. But we both love live music and how often do you get free tickets to a concert at Wrigley Field?  Well, I never had, until now.
The tickets weren't bad, along the 3rd base line, lower deck but covered (I'm sure there are more appropriate terms to describe where we sat but you get the idea...).  We had already missed the opener, Jake Owens but as we were taking our seats we were serenaded by Kelly Clarkson.  We texted Missy to let her know we made it to the show.  She came to hear the story of what had transpired and then went back to her seats right behind home plate. 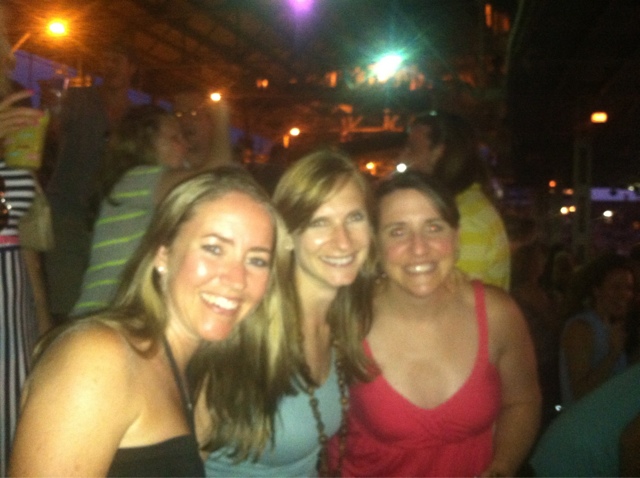 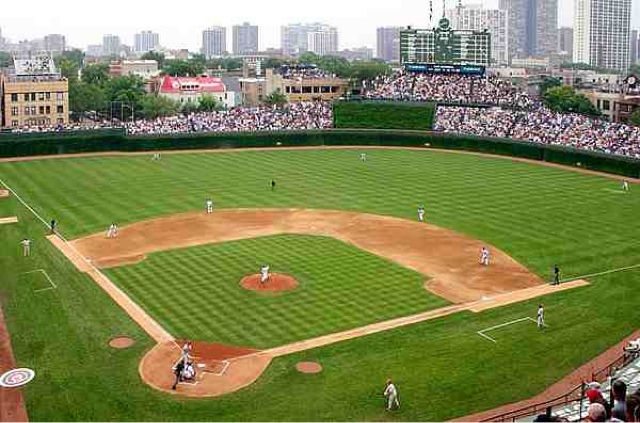 Posted by Ashley Weaver at 11:20 AM No comments: Links to this post

This past year, my mom asked me what I would do with my life if money were no object. My immediate response was this: Each day I'd read through my favorite cookbooks and plan a menu, go to the grocery store (I LOVE going to grocery stores... even if I have nothing to buy... weird, I know) and then invite a handful of people to dinner.

This summer, I've been able to live out this dream.  My Monday routine has been to find out what mom and dad have on their calendars for the week, plan meals accordingly, then go to the store for the shopping for the week. (Although not expected of me, this was my offer in exchange for "room and board" this summer). Below is a sampling of some of the menus I've made.

And I've cataloged all of the menus recipes and pictures on Evernote Food, an awesome tool for my organizational/OCD self.

But today, I had the opportunity to work with my mom to plan a pretty special gathering... An engagement party... for my little brother, Luke and his fiancee, Rachel!  Luke proposed to Rachel last night on the hole of the 8th green at WeaverRidge, which is right behind my parents house. 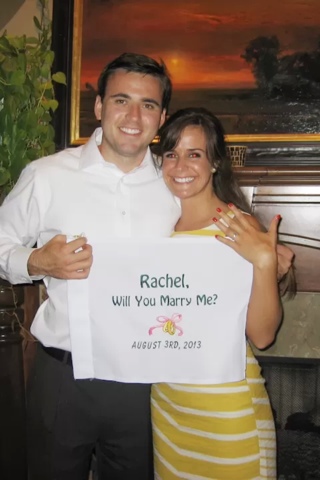 Being the thoughtful guy he is, Luke had asked my mom and I to plan this party a few weeks ago.  Rachel is staying in Illinois for the month before heading to Guatemala for 3 months while Luke heads back to Dallas. Today was the only day that both their families would be together and he knew that this event was important to Rachel so we had to seize the opportunity. Mom and I got to work and this is what the final product looked like.

But more important than the party, I'm super psyched for the life Luke and Rachel are beginning together. Their story is a sweet one, and I'm excited to see how it will continue to unfold. Here is the story in a nutshell... 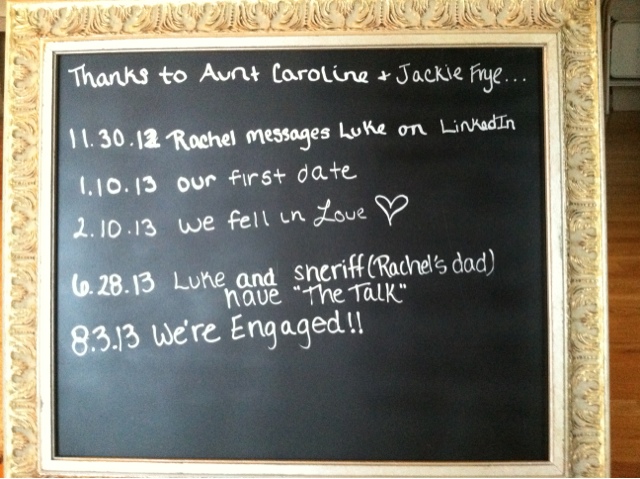 AND, I'm excited to have another awesome sister-in-law.

To Luke and Rachel... May you "live the dream" with the help of one another and The Lord. And may many be blessed by your life together.

"Delight yourself in The Lord, and He will give you the desires of your heart."
Psalm 37:4
Posted by Ashley Weaver at 7:45 PM 1 comment: