A Stone of Faithfulness

And Joshua set up at Gilgal the twelve stones they had taken out of the Jordan. He said to the Israelites, “In the future when your descendants ask their parents, ‘What do these stones mean?’ tell them, ‘Israel crossed the Jordan on dry ground.’  Joshua 4:20-22

When talk of this journey first began, I consistently stressed that the only non-negotiable was finding the right people to rent my place.  As I told friends and family of my plan, I would mention that my biggest prayer request was to find someone who would want my place, preferably furnished... as I didn't want to pack everything up and then unpack it a year later.  And maybe I didn't want to have to take down the picture wall too (which happens to be the background of this blog... a good reminder of home as I am out on the journey).

In December, I met up with my friends Elise and Sean for dinner.  As I was sitting with them, I began to think that they would be the perfect renters.  They were planning a May wedding and then would be going on a honeymoon and upon returning, my place would be vacant.  I trusted them and knew they would take care of my place, and hopefully enjoy it as well.  They were super gracious in listening to my offer, and even more respectful in sending an email to say "Thanks, but no thanks."  After getting married they were ready to set up their own house... which I totally understood.

So I was back to square one.  I had another good friend who looked to be interested, and a few friends of friends but nothing was panning out.  And then I posted pics of my place as an "advertisement" on Facebook on Easter weekend.  Within thirty minutes, I had a text from Elise. "Hey friend!  Sean and I saw your post on fb about your place & we've been talking about it as a possibility for us.  Our circumstances are still up in the air, but I'd love to talk to you about it and ask you a few questions..."  My response:  YES, PLEASE!

Elise has spent the last 2 years in Tennessee completing her Masters in Education to teach at the elementary level.  Sean is a manager at the Beaver Creek Club.  The unknown circumstances for them was where Elise would find a job.  After we talked over the situation, I told them that I would keep them posted if anyone else became interested (of which there was never any real competition) and they would let me know if she had any job bites.

As the spring continued on, we kept in touch, each of us with nothing much to report.  I kept expecting anxiety to creep in as I considered my departure date was almost a month away and I didn't have any sure commitment on how I was going to pay my mortgage for the next year.  But this entire time, I had a peace that God would be faithful to provide just what I needed.

On May 3,  Elise sent me an email that she and Sean had decided to stay in the Valley and that they would LOVE to rent my place!  And now, Elise and Sean would be the ones to "step out in faith", as Elise put it, as she didn't have a job... yet.

My first reaction was: "Thank you, Jesus!"  I felt that by having my first choice of renters commit to moving in to my place, it was as though I had the Lord's seal of approval to set out on the journey of the year to come.

I had no trouble deciding what should go on my stone... 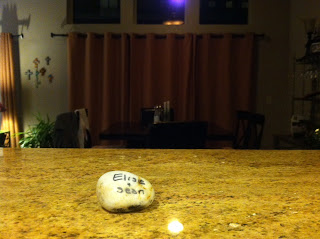